A Solution (A Haiku)

As a companion piece to the haiku "Knife Fight in Shanghai", which I wrote for my friend and teaching colleague Doc G, I wrote one for his wife, Doni, about a true experience from her time in Shanghai:

Cold night in Shanghai
What can be done about it?
Hot water bottle.
Posted by Halk-Kar at 11:02 AM No comments:

I Was Named After Queen Victoria

This is one of my favorite jokes, and I have a list of people who are willing to tell it at my funeral, or at the luncheon afterward. You could use many people in place of her in the joke, but I think Queen Victoria makes everything funnier.


This joke is kind of a paraprosdokian, based, in part, on two different meanings of “after” (preposition, “in honor of” vs. conjunction, “later in time than”), as well as on the fact that, in English, nouns (like Queen Victoria) don’t normally have case markers to distinguish between nominative (subject) and objective cases. Personal pronouns, like “she” and “her”, do distinguish cases, so that the joke must always begin with “I was named after Queen Victoria.” Especially if you begin the joke after someone has already mentioned Queen Victoria, you must never say, “I was named after her,” because then the grammar would be wrong, and if you say, “I was named after she (was named),” the joke is ruined.

This joke was inspired by (of all people!) Benny Hill, who talked about an elderly woman by saying “She was named after Queen Victoria.    … [PAUSE] … and not so very long after.”

My second-favorite Queen Victoria joke (NOT TO BE TOLD AT MY FUNERAL) is:


The best thing about these jokes is that, for people who know me, my name is now inextricably tied in their minds to any mention of Queen Victoria. Since she is far more famous than I, and far more likely to be mentioned, even by random strangers, I will be called to memory long after I’m gone.
Posted by Halk-Kar at 6:46 PM No comments:


Back in the early 1950s, there was a story in Detective Comics called "The Man Behind the Red Hood", in which Batman, teaching a class in criminology, examines a decade-old case he had been unable to solve. This is a classic story which forms the basis of some later Batman lore. A friend of mine loves this story and often laments that he never got to be in "Professor Batman's class", so I decided to write a course description for the class. I present it here for your amusement.

Course: Criminology 101 (CRM0101) 3 credits
Spring Semester, MWF 8 - 9 PM, Wayne Memorial Hall, Room 539
Instructor: Professor Batman, Visiting Lecturer
Text: Criminals: A Cowardly and Superstitious Lot, (1939 edition), by William Finger and Robert Kane
*****
This course will trace the causes of criminality, as well as its effects, and the detection, apprehension and incarceration of criminals, with discussion of the purposes of incarceration (e.g., punishment vs. rehabilitation). There will also be discussion of the differing types of criminals (hood, petty thug, gang member, henchman, mob boss, super-criminal, etc.) and their trademarks (birds, umbrellas, arcane riddles, cats, and unadulterated madness). Special attention will be paid to the high recidivism rate, particularly among super-criminals, in Gotham City. If time permits, there will be discussion of the utility of working with sidekicks and/or super-powered aliens in combatting crime.
*****
Lab Fee: $15 Covers the use of microscopes, fingerprint powder, chemicals and other forensic tools.
Field Trips: Gotham State Penitentiary and Arkham Asylum. Dates to be announced
*****
It is expected that this course will fill up quickly, so early registration is strongly suggested.
Posted by Halk-Kar at 1:03 PM No comments:

Knife Fight in Shanghai (A Haiku)


For National Poetry Month (April), here's another haiku I wrote, but first, the backstory. When I was teaching, one of my best buddies was an English teacher, Dr. Don Gallinger, known to his students (and some colleagues) as "Doc G". Once, one of his students noted a prominent "worry line" across Don's forehead, mistakenly thinking it was a scar, and asked how he got it. Don jokingly replied that, several years back, when he'd been on sabbatical in Shanghai, China, he'd gotten into a knife fight. His students, not realizing he was joking, were greatly impressed that he'd been in a knife fight, and had survived against an opponent who, likely Chinese, must have been an expert fighter, as seen in many cheesy "Kung Fu" movies. When Don told me this story, I was quite taken with the phrase "knife fight in Shanghai", and decided it was worthy of a haiku. (I know: Haiku is a Japanese, not Chinese, poetic form, but it still seemed apt.)

April is National Poetry Month in the U. S., and I post poetry each day of April on my Facebook page. I sometimes try to write and post my own work. One of my more recent pieces is the limerick below. The challenge was to write a limerick whose first line ended with the word "leopard".

The Leopard
A curious cat is this leopard
Whose coat is so wonderfully peppered.
He doesn't eat sheep.
Their fleece is too deep,
And he's sure that THE LORD is their shepherd.
Any comment or criticism is welcome.
Posted by Halk-Kar at 6:12 PM No comments:

Since April is National Poetry Month, I've been reading a lot of poems and posting a number of my favorites on my Facebook page. Some have been boyhood favorites, some have been ones I studied in school, especially in my sophomore year of high school in the English class of Brother David Rogers, the very best teacher I have ever known. I even posted a link to some of my own haiku posted earlier on this very blog.
I recently came across a blog post describing a poetic form I'd never heard of before. It's called a "Fib", for the Fibonacci sequence. Well, I was intrigued by this blending of mathematics and poetry, so I had to try my hand at this. Here are my first two attempts:


"Fib":
Verse
based, not
on haiku,
but on sequences
Fibonacci. How cool is that?

I like the second better than the first, and I'll be attempting more of these, I think. Feel free to make your own and share.

A Half-Year of Medical Excitement

I realized recently that I've never explained the drawing of me here on my blog, or, for that matter, the name "Halk-Kar".

As I mention in the "About Me" section, I am a fan of Silver Age comics, especially in the DC line. One of my all-time favorite characters was Mon-El, a teen with basically the same powers as Superboy, who Superboy, mistakenly, initially assumed was his (Superboy's) older brother. 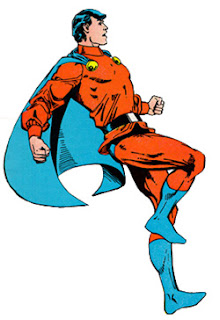 Many years after my first encounter with Mon-El, I discovered that, years before his entry into Superboy's life, there had been a character named Halk Kar (no hyphen), who'd appeared in Superman's life, and whose story was uncannily similar to Mon-El's.

Halk Kar struck me as a goofier, late-Golden Age version of Mon-El, so he was never really a great favorite of mine, but I did harbor some affection for the character. When I decided to start a blog, I knew that a good number of posts would probably involve comic books, so I decided I should use a comic book name, but one that was somewhat more obscure than, say, "Superman Fan" or "Green Lantern's Light", and I recalled Halk Kar of Thoron. (That's a bit of a pun, there, from the original story of Halk Kar. He came from Thoron, a planet in the same solar system as Krypton. Thoron is an isotope of Radon, and Radon and Krypton are both noble gases in the periodic table of elements.) I decided to hyphenate the name, to make it stylistically more similar to the traditional hyphenated form of Kryptonian names.

Now that you know a little about Halk Kar, I should explain the picture below: 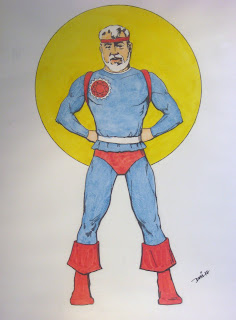 My good friend Don and I became fast friends when we discovered a mutual love of Silver Age DC comics, and, over the years, we've spent many an hour discussing favorite stories, covers, plot points and trivia. One of the amusing discussions always centered on the fact that each person on Krypton seemed to have only a single outfit --- either that, or they each had a wardrobe of several identical outfits --- because, for example, Superman's father, Jor-El, always wore the same outfit, no matter at what point in his life we saw him, and Superman's mother Lara always wore exactly the same dress any time she appeared in a comic book. Don asked me, at one point, "What would your Kryptonian outfit look like?" I had to think carefully about that, because, according to the tradition, it would be my one and only outfit for life, and, if I should one day become a superhero, it would become my costume.

I described the outfit in such precise detail that Don's wife, Doni (Yes, really.), who is a talented artist, decided that she'd like to try to draw me in it, in classic Silver Age style. The wonderful result, a full-size poster, now hangs in my Fortress of Davidtude, and a copy of it now graces this blog.
Posted by Halk-Kar at 5:03 PM No comments:

Recently, a friend of mine opined that, with the proliferation of smartphones with internet access, there was no longer any value to being (as we both are) masters of trivia. While that may be true for, say, Quizzo contests at the corner tavern, there is still value in having sometimes obscure information stored internally.

I was reminded recently of the personal advantage of trivia. In listening to one of my superhero podcasts (Batman: the Ace of Detectives --- Pendant Productions), I heard Robin, who was receiving a transfusion after having been attacked by a vampire, say, "Hey, Daddy-o! Make that type O!" Now, I'd bet not one person in a thousand would get the reference to the Nervous Norvus song, "Transfusion" , from the mid-50s. In fact, most listeners wouldn't even know it was a reference to anything.

Similarly, many years ago, my students, knowing I was a comic book fan, asked if I'd seen the episode of The Flash on TV the night before. I started expounding on the fact that, in that episode, the character of the blind news vendor was played by Robert Shayne, who was, at that time, legally blind. I pointed out that Shayne had played Inspector Henderson on The Adventures of Superman, starring George Reeves as the Man o' Steel, and that Shayne's character in the Flash episode had his newsstand on Bessolo Boulevard, and that George Reeves' real name had been George Bessolo. One of my students said, "Man, you enjoy that show on a whole different level than most people!" I pointed out that, the more you know, the more such references you can "get". Again, I doubt a lot of people even realized there were such references.

When the TV show Buck Rogers in the 25th Century was on the air, there was an episode in which Buck was in a spaceport, and there were loudspeaker announcements in the background. One announcement was, "Paging Dr. Adam Strange of Alpha Centauri." Again, most people might not even realize that was an allusion, as it were, but I enjoyed it.

It does no good to be able to Google the references, if you aren't aware that they are, in fact, references. It's certainly a good thing to be able to find information, but it's even better to know the information.
Posted by Halk-Kar at 2:43 PM No comments:

The Ideal (A Haiku)

The ideal: Do right
for no other reason than
because it is right.
Posted by Halk-Kar at 9:25 AM No comments: